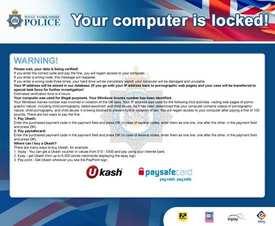 The dangers to your data have been highlighted during the last few days in the national news yet again. The discovery of the perpetrators of the ransom-ware in US have been the stuff of the news bulletins. However this is nothing new, and it has been an ongoing and hidden story.

A SOUTH Tyneside computer company is warning people to beware of a virus plaguing users.
The warning, which claims to come from Metropolitan Police, states that the computer has been locked because the user has been viewing child pornography.
Other reasons given by the virus writers claim the computer has been used to view banned websites, exchange illicit information exchange, and for storing or viewing pirated content.
It then claims the computer user must pay a fine of £100, and asks them to buy vouchers totalling the amount before entering the vouchers’ codes to unlock the computer.
Nader A-Naderi, who owns computer shop, Aquila Systems in Laygate, South Shields, with his wife Carol, said: “We’ve had a couple of customers come in who have this virus on their computer, and I want to warn people not to give their details out.
“This sort of virus is a particularly pernicious one that is plaguing people’s computers.
“It’s what I call ransom-ware, where it claims to lock your computer until you hand over money.
“This is a particularly vicious virus, because people within a household could start to point blame at each other before they realise that it is a virus, and it makes some very awful claims.
“Because of the things it says, people could also be too embarrassed to take it to a computer shop and might pay the money just to get rid of it.”

The simple fact remains that increasingly predatory computer viruses are targeting greater numbers of individuals, who are falling victim to the subsequential damages and losses caused by these rogue programmes coded by malicious individuals at times in association with criminal gangs and organisations.

The fact that companies are subject to huge financial losses somehow overshadows the many individuals whose combined losses dwarfs these companies' financial costs. To counter these losses and to keep your data secure is an easy enough process, and it costs far less than the subsequent losses resulting from the viruses and malware having the free run of your computer. To this end we in Aquila computers can help you decide the course of action you need to take to keep your data secure and intact, as well as the measures needed to keep you protected from the known and prevalent malicious programmes. The cost of prevention is far less than the the other alternatives, along with their unpleasant and stressful methods; ie falling victim to the viruses first and setting measures to shut the barn door after the horses have bolted.

Organise your media files with the help of an Aquila Media Centre for From only £45.00